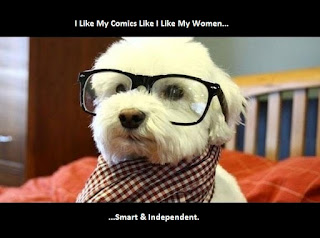 I'm a secret comics snob. OK, maybe not so secret. There are comics that I simply groan or ignore almost all the time. I don't read cheesecake comics. I don't read biography comics. I loathe the idea of movie adaptation comics or comics that tie into a movie. Often the thought of cross-overs in super hero comics gives me depression. These are just a few examples. I struggle with being able to judge a work without preconception. This isn't limited to comics. The older I get, the more I seem to jump to what I think I know about something, rather than open myself to experiencing it before making a judgment.
I want to be the type of fan that sees a "new" #1 on the shelf and not think;
"great, another marketing ploy to get me to buy this title again", but it’s increasingly harder to do. It’s perhaps why I have been moving more and more to creator owned comics. I’m far more likely to buy a comic that the creator had control over from start to finish. By doing that, am I missing out on the shared experiences that the comics community has with continuity books? Has this increase in snobbery led me back to a life of comics isolation?
Part of the fun of rediscovering comics is the community. The community still spends a lot of its time talking Marvel & DC books, books that I don't really read much anymore. By not reading these books I do feel more and more of a comics outsider. It’s this struggle to weigh the enjoyment of reading a book for the enjoyment of reading it, vs. reading it and then having the pleasure of discussing it with the community, that I find myself pondering.
At this point in my comics life I find the pleasure of reading independent comics and dismissing the comics I have a bias against to be the best option for me. Am I missing out? Probably. Does my snobbery have an isolating effect? Absolutely. Is there an answer to this problem? Unclear. Do you have bias against certain comics? Do you feel your prejudice has hurt your enjoyment of comics? I’d love to hear your thoughts! Till next time True Believers....
Posted by Aaron at 5:17 AM