Making the Grade: Comics As Investments 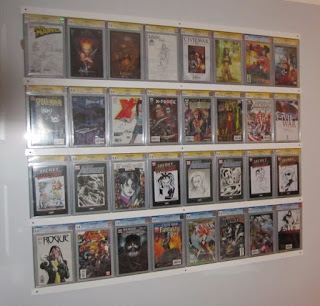 Recently I’ve been selling some of my other hobby collections (classic video game consoles and magic the gathering cards) to make some money for my one true passion, comics.  I want to spend the money I’ve gotten from selling the other things on comics ill both enjoy owning and in the long term, should I ever need to, be able to sell again for cash. When I start down this path, there are several things I’ve come across when thinking about "investing" in comics that leave me confused and concerned.

Issue 1 - Graded comics. I like the idea of having my key comics graded because it would leave me with a feeling that their value is somehow "set" by a third party. While this is arbitrary and I understand that, I can’t help but feel that it’s the closest to a real "value" for a comic. On the other hand I’ve now locked that comic away, it’s no longer something to be enjoyed, and it’s more like a bond or coin that you stick in a vault. Does that pervert the joy of comics? I'm not sure.

Issue 2 - Collecting for the sake of collecting. I enjoy comics, I love comics. I don't read all the comics I buy, some I buy with the intention of reading and have yet to, some purely to complete runs of series I have nearly complete. The purist in me thinks that if you buy a comic, it should be to read, not to just own. Comics should be for your enjoyment and when you hoard them you take away from what makes them great. Another part of me thinks that like any collection, it will grow, it can be an investment and part of the joy of collecting is to collect.

Issue 3 - Original Art. I have also been thinking about buying either original pages or doing artist commission. I like the idea of paying artists to do work for me, and I have in the past, I've also bought some original pages of books I love as well. I'm not sure that if I had to, I would be able to sell them again. It’s that line where I want to own this art by artists I love, but not being a rich man, sometimes you need to sell things you have bought to cover an unforeseen expense. It hasn't happened yet to me, but I am the kind of person who thinks about what could happen.

What are your feelings on comics’ investments? Do you buy original comics pages, original art? Have you sold comics or art you bought? Was it bought with the purpose of investing?