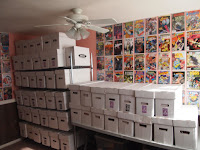 It's becoming a problem. My wife says only half-jokingly that I'm a hoarder. I say that's impossible! How could I be a hoarder when all my comics are bagged, boarded, organized and preserved. In my heart I know she's right, and I've spent a lot of time thinking about the compulsion of collecting and what it means to me. When I look at a box full of, for example, Teen Titan back issues I know they aren't something I will ever read again, but at the same time there is no part of me that thinks "Just give them away then, sell them, get them out of the house". That would mean giving up a part of me. Comic book collecting is a complicated hobby for me. I love to read comics. I read them as a kid and discovered them again a few years ago as an adult. I read them voraciously. At the same time I buy back issues by the bundle, often never read them and keep them in boxes with the intention of having them there for the rest of my life. Why?
My own self-reflection makes me think of my childhood. I grew up in a small rural house in an area that at the time had little access to popular culture. I didn't lack for food, shelter, clothing, love, or really much of anything. What I didn't have was exposure to much outside culture til my middle school age. Discovering music, movies, and most importantly to me, comic books, was a revelation. This world that I had never know was suddenly open to me and I couldn't get enough. This lasted til my mid teenage years and the obsession of comics transferred itself to collectible card games, but the obsession to collect, to own, didn't slow down. I felt that if I didn't have it, I never would be able to have it, and by having it, it made me more important, more valuable.
I'd like to say that this feeling, this need, to own things has changed over the years. There isn't redemption at the end of this confessional. It isn't a cry for help. I enjoy collecting. I enjoy getting that rare back issue, or that box of comics of Craig's List that I can comb through. I have a spouse who keeps me somewhat in check and a budget to limit my spending. But in the end I wonder if I will mature and have a time in my life where I don't feel the need to have all these items. Will I be able to keep the symbols of my past that mean the most to me and let go of the rest? Right now that's not a future I can envision, but the future isn't written so only time and space can tell.
Posted by Aaron at 8:03 AM