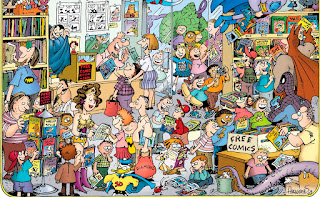 How do you share comics with people? How have you learned to show what’s great about comics to people who have never read them before? What mistakes have you made in the past and what did you learn from that? It’s up to all of us, the community of comic book fans, to bring people into this wonderful world we have discovered.  The more people we have to enjoy comics with the better it is for all of us, so be the best salesfan you can!
Posted by Aaron at 10:56 AM