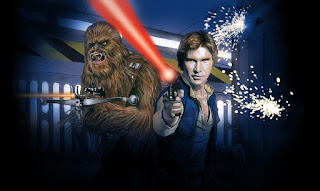 This post is in response to some questioning of my short review of Star Wars #1 from Dark Horse that I posted here: http://twoheadednerd.com/2013/01/10/ludicrous-speed-reviews-010913/

Some comics aren’t for everyone; some comics aren’t even for someone they should be for. Some comics, sometimes, just don’t make that connection, even when everything about them should be perfect for a reader. One of those comics for me was Star Wars #1 by Brian Wood. I’m not going to go into technicalities on art style, continuity, wording or any of that. The fact is, nothing is really wrong with this issue at all. It’s great. The art looks great, the writing was good, and everything this book was supposed to do it did. But, let’s back up.

I’m a big Star Wars fan. The original movies were formative for me as a child. I’ve watched those dozens of times. I’ve seen a lot of the extended universe stuff, clone wars cartoon, specials, had books as a young child. I named my Son Luke for crying out loud! That being said, I never could get into the novels or really any of the star wars comics. I like flipping through an old Droids comic from Marvel from time to time, but that’s reading for nostalgia, not reading a new comic for pleasure.  So that being the case, what does this new Star Wars comic do for me?

The answer is: Nothing. I don’t really care what happens. This is no fault of the creators, the book is meant to be filler between Star Wars and Empire, and that’s exactly what it will be. I’m sure it will be very enjoyable to people who want to read it, there just isn’t any spark in me right now that cares. What it comes down to for me is that I know what happens, all this book serves for me is more flavor text to a story I’ve seen and enjoyed a hundred times. This makes me a hypocrite, there are properties that I like to have these fillers for, Star Wars isn’t one of them for me. So when I give a short review saying that star wars fans will love this book, but if you aren't you probably wont care, that's exactly what I mean. Hope this clears things up, hope you all enjoy this book as much as you should! I will probably even try a few more issues, but I don’t really feel that excited for it, and that’s just my opinion.